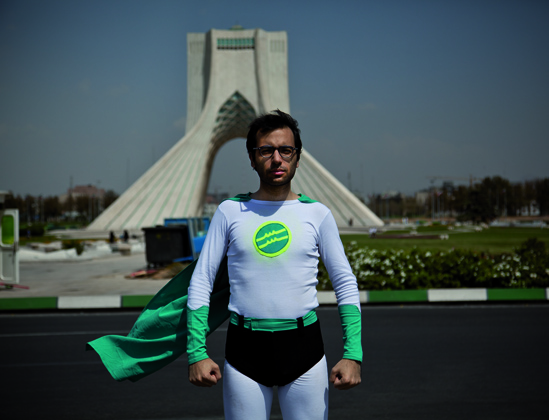 Sohrab Kashani is an artist and curator based in Tehran; he is also the founder and director of Sazmanab Project. His SuperSohrab series comprise performative interventions that result in photographs, videos, and comics. The Adventures of SuperSohrab depicted in these series appear to be rather mundane — cooking, washing dishes, doing laundry, reading, logging-in onto Facebook, and going to sleep. These are familiar tasks; familiarity of consumption aided by products that possess “global” brand recognition — such as Facebook, titles on the bookshelf, some candy; and even a customized Superman costume is somewhat familiar. Yet the situation in which these activities unfold is not that comfortable — it is estranged from itself.