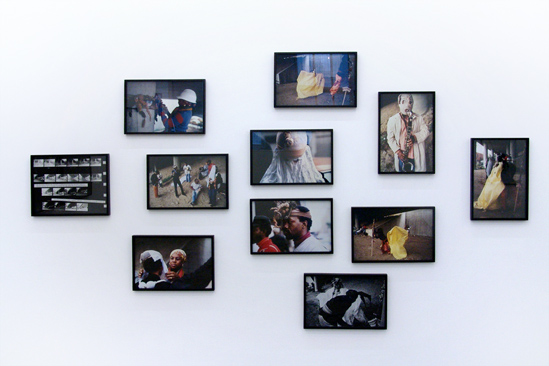 Freeway Fets, 1978. C-print, series of 11, 12 x 18 in each, edition of 5 (+1 AP).
Nylon mesh headdresses, paper tarp costumes, decorated staff, Senga Nengudi, David Hammons, Maren Hessinger, Studio Z Brothers (Roho, Joe Ray, Franklin Parker)
Under a freeway overpass by the Los Angeles Convention Center in the 1300 block of West Pico
Photo: Quaku / Roderick Young
'Through the CETA program, we were all able to make public art works. I chose to do a piece around the supporting columns of a freeway overpass right by the L.A. Convention Center. I liked this area because it gave me a sense of what parts of Africa might look like. It had a dirt floor with little palm tree shoots forcing their way through here and there. It was a place for those without homes to sleep. There were remnants of small campfires and sleeping bags under the shelf of the freeway overpass.

I decided I wanted to celebrate and christen the space and my piece after it was hung. I was excited by the prospect of doing a public performance. To that date I had been content doing private studio art activities (performances) with only a photographer present as audience and documenter or with cohorts following through on ideas wherever they would lead us.

'Improvisation was the key. It opened the window to chance to let the soul/unconscious do its work.' (Maren Hassinger)

At times, I collaborated with Houston Conwill, Maren Hassinger and Franklin Parker, and we would meet in different parts of Los Angeles, i.e. the Greek Theater when closed, an abandoned Catholic School’s swimming pool (site for the Performance “Rapunzel” in 1981), Exposition Park, etc.

I really did not ask anyone in advance formally to participate in “Freeway Fets”. We did not rehearse. I knew the concept I wished to deal with, which was a reflection of the piece we were celebrating. Each column had nylon mesh forms wrapped around them. Some of the forms and columns were representative of male energy, the others of female energy. On one column I inscribed names of our children, on another the names of ancestors, relatives and personal friends, some of whom succumbed to the dis-ease of being black in America. I had grave concerns about the tenuous relationships between black men and women. I wished to portray myself as a uniting spirit, a harmonizing spirit between those two factions. I asked David Hammons to be representative of male energy and Maren Hassinger to be representative of female energy. I made my costume and the head dresses of all who participated and all who wanted one. David used an art staff, one of a series he was working on at the time. He also added a coat hanger under the headpiece I created for him to expand it. I asked my ‘Studio Z’ brothers - Roho, Joe Ray, Franklin Parker, and others - to bring instruments.

We all converged on the place that morning. I cleared the air and the area with a palm branch, words, and water. I told everyone the concept - we put our “spirit heads” on and the music began. I had never danced with a mask on before. As I gave myself up to the music and the situation, I became other then myself. The concept took over and fulfilled itself. Besides the invited guest there were some onlookers from the street. One comment from an onlooker was that it was like looking at an African ritual and Kabuki at the same time. I was most pleased with this comment since I have been influenced by both, particularly at the same time.'