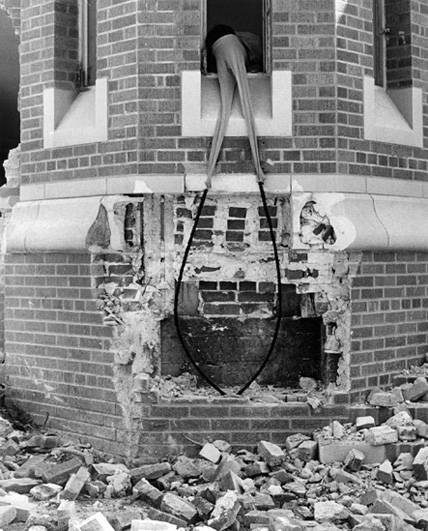 Rapunzel, 1981. Silver gelatin print, 40 x 30 in, edition of 5 (+1 AP).
Nylon mesh, human hair on wire
Arlington Avenue and Pico Boulevard, Los Angeles
Photo: Barbara McCullough
'I passed by an old Catholic School - site of previous collaborative activities with Houston Conwill, Maren Hassinger, and Franklin Parker - that was being demolished. I was dismayed because it was such a beautiful old brick building. I called Barbara McCullough to meet me there so that she might record me performing in one of the remaining parts of the building while the demolition team continued their work. I could not allow such a majestic structure to be turned to dust without saluting it or saying farewell in some way. Since the remaining structure looked like a tower, I created a head/face piece of nylon mesh connected to human hair on wire (a remnant of one of David Hammons’ wire hair kabobs) that allowed me to play the role of Rapunzel with all the women’s issues that conjure up.'